Menu
Safety, Learning, Respect- our three key values. Arlecdon primary School is proud to be part of the West lakes Multi-Academy Trust
B Log In Log in
C Google Search
A Google Translate

In accordance with The Department for Education we aim to actively promote British values in schools to ensure young people leave school prepared for life in modern Britain. Pupils are encouraged to regard people of all faiths, races and cultures with respect and tolerance and understand that while different people may hold different views about what is ‘right’ and ‘wrong’, all people living in England are subject to its law.

The Key Values are:

Our Remembrance Event in 2018 was centered around British Values. This is a transcript of the speech given by Mrs Figes on 9/11/18 during our Remembrance Assembly :

This weekend Remembrance Events will be held up and down the country. Some will be large affairs, like that at the Cenotaph in London, whilst others will be more private ceremonies at homes and churches.

As a school we have an annual 2 minutes silence and for most of the children this event seems a strange ritual.

This year, marking 100 years since the end of the Great War, has been one which we have tried to embrace in order to help the children to really understand what we are remembering and why. It is easy to forget that those we see in black and white photos, living and fighting in muddy fields, were real, living and breathing persons. These people had families, they had jobs and they had desires for the future. They felt the cold like we do and they felt fear and pain.

At Remembrance, we think of soldiers in the past, we think of people who lived through wartime and we also think about soldiers serving now. Unfortunately we do not live in a peaceful world. There are conflicts everywhere and men and women from Great Britain, are called upon to serve still. Unfortunately there are still those who suffer life changing injuries whilst serving in our armed forces. The Royal British Legion helps to support these people through the money raised in the poppy appeal.

It is important that we link our Remembrance events to our thinking about British Values. Those that served in the two world wars, believed they were protecting British people and British Values and many people still sign up to the armed forces with this view in mind.

So what are the values that they seek to protect? According to the OFSTED and the Government, our British Values are:

The current world that we live in is one of challenging views and competing voices, this is only possible because people are allowed individual liberty and freedom and it is important that this is protected. However it is essential that we recognise that without tolerance and the rule of law, we would find ourselves living in a much less safe place.

I hope that when you undertake your two minutes silence you think about how lucky we are in this country to enjoy freedom and relative peace. To think about others who have been less fortunate, only because of the time in history or the place in which they were born. As a consequence of fate, they have been part of wars and conflicts which have led to loss of life or serious injury. Also think about those who choose to help others, who have decided to join the armed forces, knowing that it is dangerous but in order to make a difference to the lives of people that they have never met. Their sacrifice is one that we should be eternally grateful for. These brave men and women, are showing British Values in action every day.

At this time we think about those who have given their lives in conflicts of the past and in modern times. We think about the sacrifices of those who serve now and in the past. We hope that you will comfort the grieving and traumatised. Please help us to recognise how lucky we are to live in peace and how important it is for us to work to ensure that peace is maintained in our communities, country and world. 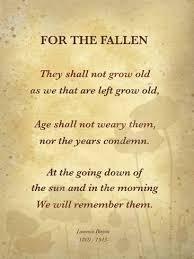